Vanilla beans are a world full of flavor ready to be unlocked. True, they’re not the most cost-effective of items, but you can use them sometimes as a treat for yourself and your (maybe guests). For those occasions, here are some tips on cooking with vanilla beans.

When I was little, I had never stopped to ponder how vanilla looks like and where that flavor that I had felt in ice-cream, mostly, originates. Then, I saw the little vials of vanilla extract, and still, I didn’t wonder where they come from. The answer just dropped into my lap when I was watching a movie. It was this flop romcom from 1999, “Simply Irresistible,” starring Sarah Michelle Gellar, also known as Buffy.

Her character was a failed chef who starts to have divine inspiration and put all her feelings in her food – and people who eat it start to feel what she’s feeling. That movie is one of my guilty pleasures, and I love the scene where her love interest gifts her with a vanilla plant in a pot. That is when I first saw someone cooking with vanilla beans. 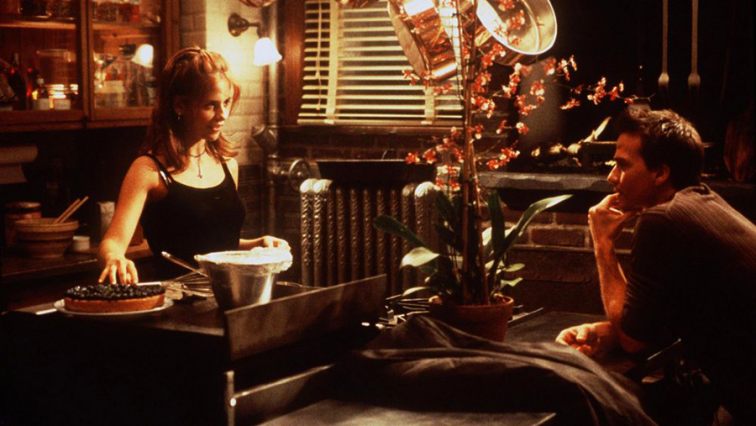 In "Simply Irresistible," the character played by Sarah Michelle Gellar receives a vanilla plant from her love interest. And then she starts cooking with vanilla beans.

Where do vanilla beans originate?

They are the fruits of a few particular kinds of orchids. And they’re so expensive because these orchids require special conditions for growing and handling. Once people harvest them, they have to be dried, cured and aged. All this labor and handle-with-care strategy is why vanilla beans are one of the most expensive spices in your kitchen.

So a vanilla bean is a waxy dark brown pod filled with thousands of tiny and very flavorful seeds that look like brown specks.

How to choose and store vanilla beans

And if you do invest in them and want to start cooking with vanilla beans, you should make sure to pick only the best. When you pick them up at the store, feel through the packaging and if the beans are plump and bend a little to the touch, get them! They should also look glossy to be the best and be powerfully fragrant. Don’t pick up the ones that look dull and feel brittle, because it will be harder for you to scrape out the insides.

Keep them in a dark and dry place, at room temperature, like a cupboard. If you open the package and only use some of the vanilla beans, then store the other ones in a sealed plastic bag, with the air pressed out. Since we’re here, it’s best to buy the vanilla beans when you know for sure you’re going to use them. They tend to dry out in time, even if they’re sealed. So make the most of them.

Vanilla beans should be stored in a cool, dry place, in a sealed plastic bag.

The moment you’re ready to use the vanilla pods you buy, then you can scrape the seeds out of them. You can mix them in your baked goods, for example, along with the other ingredients. And in the finished product, they will look like dark-colored specks in the food. And that’s amazing because all you have to do is scrape the seeds and you need no other preparation for this ingredient.

One vanilla bean is equivalent to about three teaspoons of the vanilla extract you can buy at the store. You can make extract from the bean if your recipe requires it. But adding those seeds doesn’t hurt your dish at all – whatever it may be. The seeds actually improve on the textures, and flavors, and infuse your dish with even more vanilla flavors.

So you’re using the seeds you scrape from inside the vanilla pod, but hold on a second! There’s plenty of flavor in the pods, too. And you don’t want to waste it, right? After you’ve scraped the seeds out, you can use them to infuse different foods with them, like milk, cream, powdered, sugar, even salt, and maple syrup! First, you have to dry them up and then add them to whatever you need to be infused.

Vanilla pods are amazing for light and fluffy desserts, like cakes, cupcakes, or muffins.

You can use vanilla extract in any sort of baked goods you want, including cupcakes.

If you want to use vanilla extract in your recipes, you can make some from vanilla pods – and, unsurprisingly, it will turn out better than any kind of vanilla extract you can buy at the store. You will also need to prepare this in advance because the process of making the extract takes about one month and a half – about six weeks. Use about one cup of vodka to 8 vanilla pods. Add them all in a glass bottle, and cork it. Then shake the bottle regularly, to make sure the flavor disperses in the alcohol.

Just remember that there's a vanilla bean shortage right now and the world production has been severely affected. So try not to go overboard with cooking with vanilla beans.

5 Ways to Bring More Cantaloupe in Your Life