Have you ever imagined that a watermelon could be one of the most expensive foods in the world? If you're quite surprised by this, you should check out the entire list! There are other things on there that might make you gasp.

If you feel an all-devouring passion when it comes to food and you like to keep up with all of the trends then you might want to know, as a curiosity, which are the most expensive foods in the world. Even if you probably won’t eat any of them, it’s interesting to find out the prices of the most extravagant dishes in the world and what precisely they contain.

10 of the most expensive foods in the world

One kilo of bird’s nest soup (in the photo above) can cost up to 2,000 dollars. This means just one bowl can cost between 30 and 100 dollars. Why? Because it’s made out of edible bird's nests, which have real bird saliva in them. The bird’s nests are particularly prized in Chinese culture due to their rarity, and supposedly high nutritional value and exquisite flavor. This rare dish is known to be incredible taste-wise, but also really expensive.

We really love watermelon, but this one – Densuke watermelon – is something else, they say. It costs about 200 dollars, and for what? Supposedly, for being sweeter than your standard 6-dollar watermelon. Or maybe the real reason is that they only grow this type of watermelon in Hokkaido, Japan. This rare fruit has sold for up to 6,000 dollars in an auction.

When we hear 'sundae', we might think about a McSundae or a homemade variety. But there are rich people out there who are willing to pay 1,000 dollars for a sundae at Serendipity 3, a restaurant in New York City. Known as their Golden Opulence Sundae, which is made and served only by special order, it has made its way into the Guinness World Book of Records for being the most expensive sundae on the planet. The ice cream comes with a gold leaf and a sweet caviar, and it’s served in a crystal goblet with an 18-karat gold spoon on the side.

The Golden Opulence Sundae is in the Guinness Book as the most expensive sundae. / PHOTO: Instagram

Fritz Knipschildt is a Danish chef and chocolatier. He created the La Madeline au Truffle, the world’s most expensive chocolate. Just one 1.05-ounce piece costs 250 dollars. A rare French Perigord truffle (a rare mushroom) is surrounded by a rich decadent ganache. The result is pure extravagance, they say. Made by hand, each madeleine is placed on a bed of sugar pearls in a gold box tied with a ribbon. 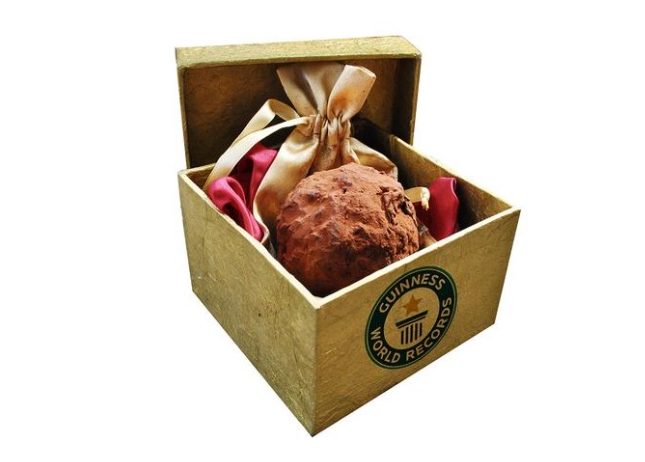 La Madeline au Truffle is the world’s most expensive chocolate.

As you can imagine, the most expensive foods are the rare ones. White Alba truffles grow mainly in Northern Italy. The record price that someone paid for a single white truffle was 330,000 dollars. Weighing 3.3 pounds (1.5 kg), this record was matched once again three years later.

The record price that someone paid for a single white Alba truffle was 330,000 dollars.

Have you heard about Kopi Luwak? It’s a type of coffee that's made with partly-digested coffee beans. The Asian palm civet eats the beans and then defecates them. And, yes, that makes it one of the most expensive coffees you can buy in the world. A single cup can cost between 35 and 80 dollars. Looking to buy a one-pound bag? You’d be lucky to find one for 100 dollars, as this quantity often sells for 600 dollars.

Kopi Luwak is one of the most expensive coffees you can buy in the world.

Matsutake mushrooms are also quite expensive. Their price depends on their quality, origin, and availability. At the beginning of their season in Japan, cultivators often sell the highest grade of mushrooms for around 1,000 dollars per kilo. On average, however, a kilogram of imported matsutake mushrooms is around 90-100 dollars.

One kilogram of imported matsutake mushrooms costs around 90-100 dollars.

If we have a watermelon on the world’s most expensive foods list, why can’t we also have a cantaloupe? Yubari King cantaloupes originate from Japan and now, on average, two of these melons will sell for around 250 dollars. Quite affordable, if you think about the fact that two of these melons once sold for 23,500 dollars.

Two Yubari melons will sell for around 250 dollars. / PHOTO: Instagram

We are used to cooking and eating curry dishes. But this one is a very expensive one, and we don’t think we’ll ever get to taste it. One portion of Samundari Khazana, which means ‘Seafood Treasure’, costs around 2,700 dollars. The chefs make it with sea snails, a whole lobster, caviar, and edible gold.

We all know caviar is expensive, but Almas caviar is at another level. Coming from the Iranian beluga fish, Almas caviar sells for around 35,000 dollars per kg, which makes it the most expensive type of caviar. It costs that much because the rare albino fish that produces it is between 60-100 years old when they collect the caviar.

Disneyland Is Home to This GIANT Pickle-Wrapped Corn Dog