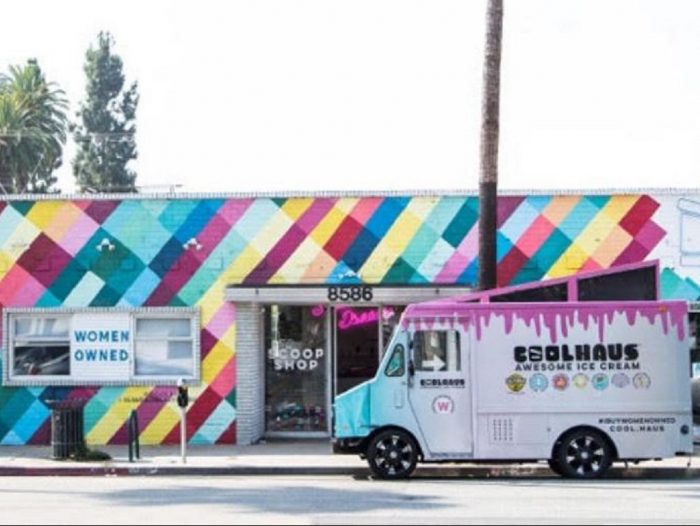 Quotes in this article were transcribed from The Foodbeast Katchup podcast with special guest Natasha Case.

The bare minimum of running an ice cream truck is having one that runs, but the co-founders of one of Los Angeles’ most celebrated ice cream purveyors didn’t even have that luxury to start.

Coolhaus ice cream started with a run down postal service truck that didn’t even have an engine.

Co-founder Natasha Case told her story on the Foodbeast Katchup podcast, detailing that she found that truck on Craigslist for $2,700.

That non-operable truck ended up being the vehicle that drove them to success when they took a chance on having Coachella be their very first gig in 2009.

“We just begged them for months,” Case detailed. “We were the first food truck to go and sell there.”

When Case and her partner Freya Estreller decided to start Coolhaus, it was on the strength of Estreller’s business saavy and Case’s knack for creating through her architecture-driven mind.

While working at Disney Imagineering, she imagineered her own combination of cookies and ice cream for her coworkers to enjoy, going as far as naming the flavors after famous architects.

The ice cream they sold at the music festival was a series of concoctions that Case had played around with and tested in the past. She said their first flavors that took off at Coachella were Double Chocolate Cookies with their “Dirty Mint Chip” squeezed within, a Snickerdoodle with strawberry ice cream, and Ginger Cookies with Meyer lemon ice cream.

If you’re wondering how you even get an engine-less ice cream truck to Coachella, it took some low budget ingenuity.

Knowing that Triple A insurance offered 200 mile tows, they signed up for Triple A, told the truck they were stranded in the middle of the road, and needed a tow to Coachella.

Obviously the tow truck driver showed some mercy, as was evident when he literally placed their truck on the Coachella campgrounds, but with a little luck, they made it to the music festival.

Being the first food truck to ever make its way to Coachella, they absolutely crushed it, building a cult following through the weekend that carried over to this day.

As they built their brand on the street, and their following grew along with them, Case and Estreller knew there were limits to being a food truck-only brand, and worked their way into grocery stores.

“I went to my local Whole Foods in Glendale, and I found the guy stocking the freezer aisle,” Case said. “I asked, ‘What does it take to be one of the brands that you put out on the shelf?'”

With Whole Foods having a reputation for helping local brands, Case made her case for Coolhaus, and after doing well at that store, they got the green light to start selling in more Southern California stores.

Fast forward to 2019, Coolhaus is now in 7,500 grocery stores across the country, and is becoming a household name in California and beyond.

And it all started with a beat up postal service truck, and a motivated couple to drive it.